Everything else. Who is your favorite band or music video? See a great movie lately?
Post Reply
3 posts • Page 1 of 1

Without having looked into the question myself, I thought that the correlation between the risk of extreme weather/hurricanes with increased temperatures was an uncontroversial finding because of media reporting. I was therefore intrigued by the recent post on Dr Junigs blog suggesting that hurricanes do not increase with increased temperatures. However, I also thought the data lacked an important part as it did not include temperatures. After all, the theory is that extreme weather increases with increasing temperatures, not necessarily over time. While there is a trend of increasing global temperatures over the last century, there is variability between individual years, and by not considering temperature data, trends migh be difficult to discern from noise. Also there were comparably few hurricanes included, and reported per decade, potentially affecting the precision.

I decided to have a go at this myself and though I should share my findings. I do realize that more competent analyses of this are most certainly published, but what is the fun in that? (And the blog post expressed an annoyance towards experts anyhow...).

I found a somewhat longer time series (until 2014) of Atlantic hurricanes here:
https://www.nhc.noaa.gov/climo/images/A ... Table.pdf
This included more hurricanes, I guess since it included all hurricanes in the region, not only those affecting the US mainland.

Temperature data from the same region was found here:
https://www.ncei.noaa.gov/access/monito ... 1965-2014

I decided to go back 50 years, i.e. from 1965-2014, (keeping it to decently modern times, assuming that data quality might be somewhat compromised for older data). I further decided to look at major hurricanes only.

Findings: There was a clear trend in increasing temperature over the time period in this region: 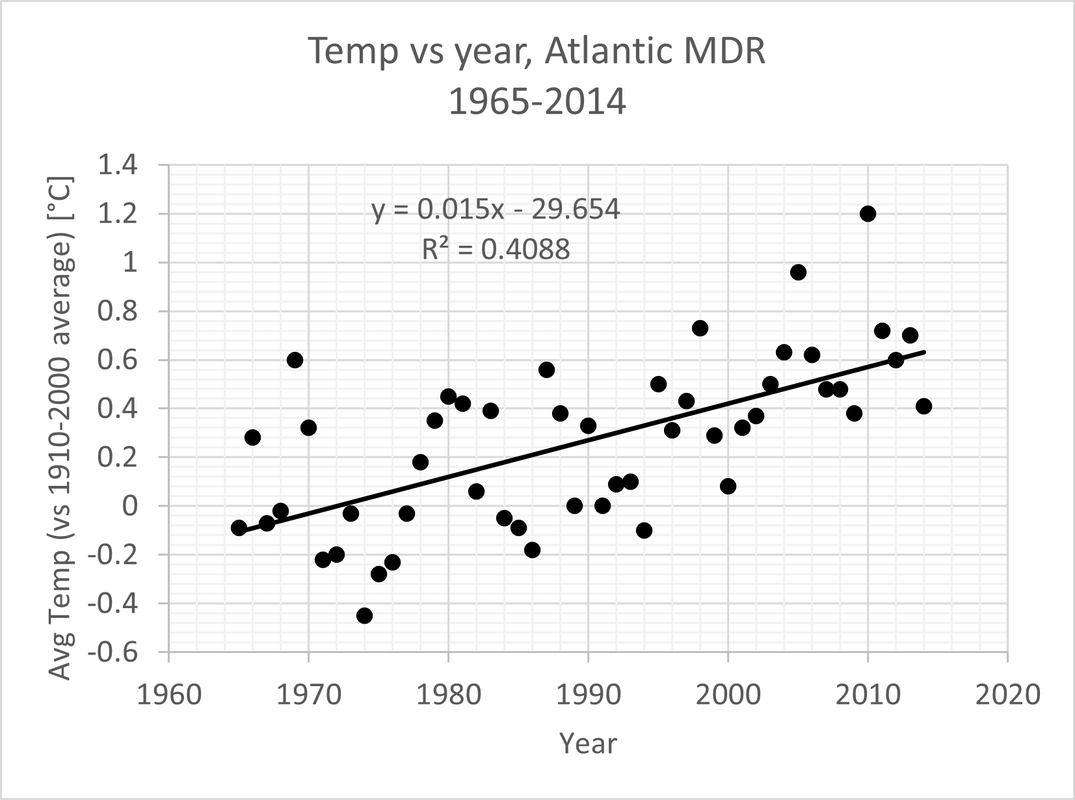 There was even a weak trend for increased number of yearly major hurricanes over time in this dataset (with an apparent increase in hurricanes starting in about 1995): 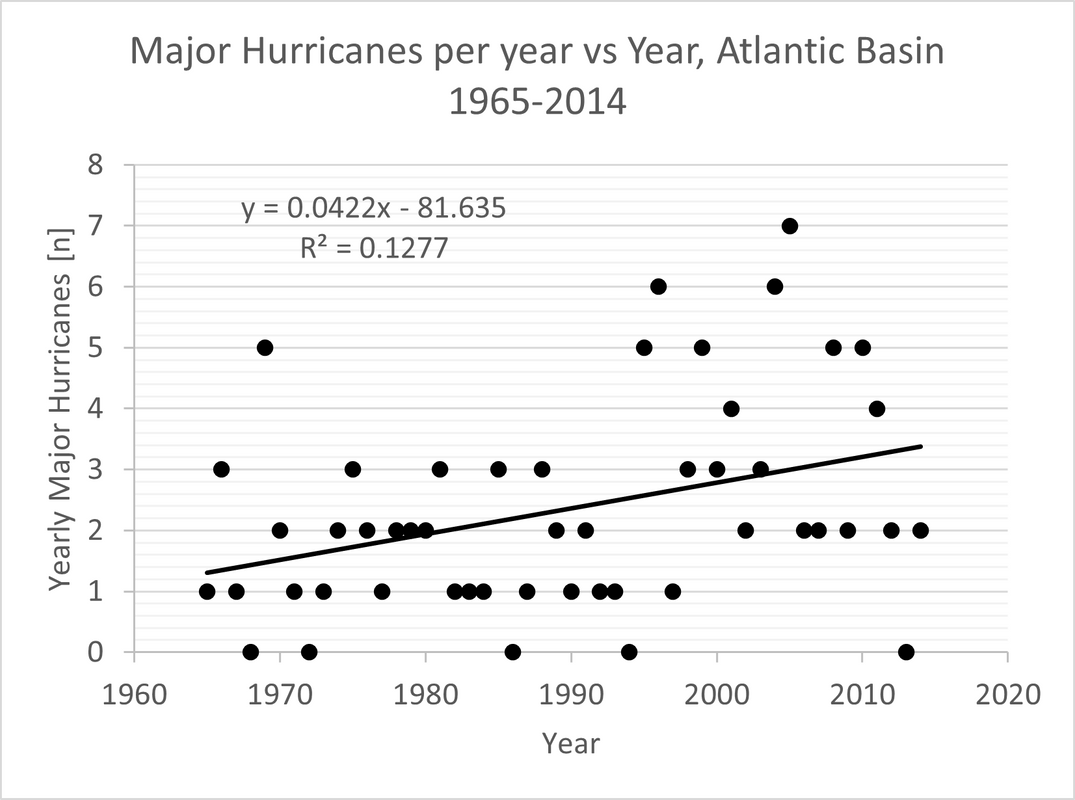 Finally, plotting of yearly hurricanes vs temp resulted in a better correlation: 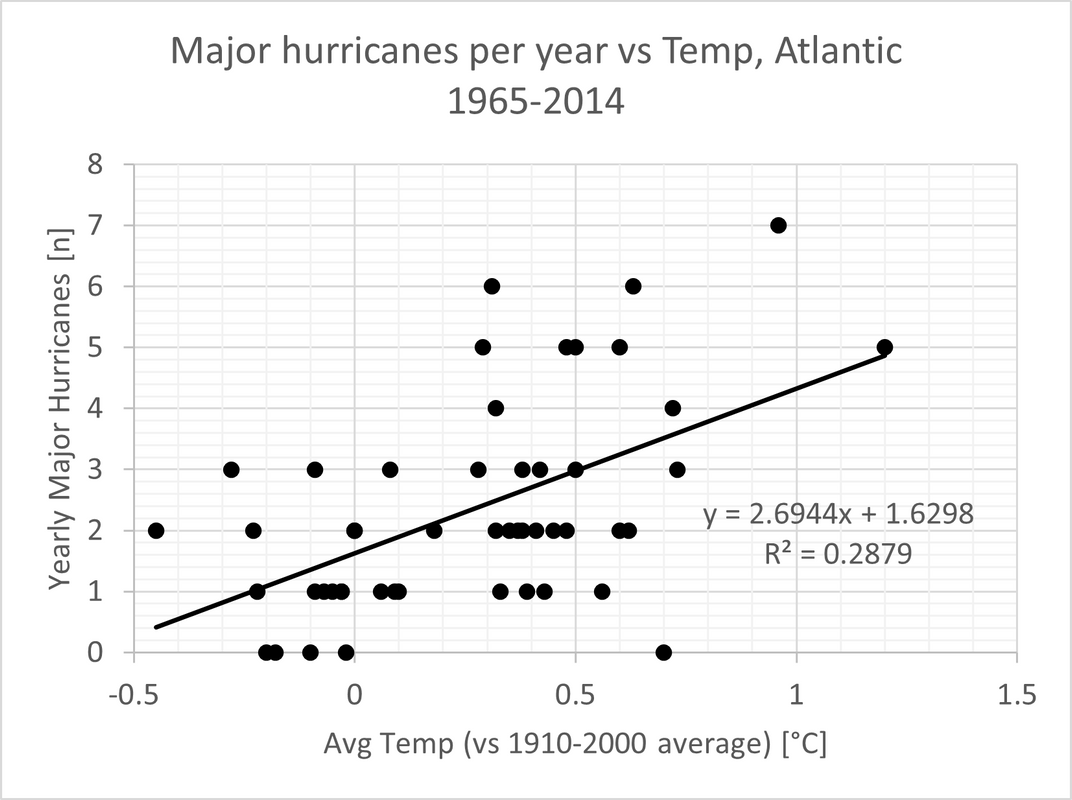 In conclusion, contrary to Dr Junig´s notion, these data would support there is a positive correlation between average temperatures and number of major hurricanes/year. Thus, I think that an increased risk of major hurricanes with climate change appears to be a reasonable assumption.

(Regarding the other notion in the blog post on naloxone effects in Suboxone, I have also read the literature and concur with Dr Junig´s analysis abuse deterrent effects are commonly overstated.)
Top

Re: Hurricanes and climate change

I guess people see what they want to see, and numbers can be spun in many ways. Most of the climate alarmists talk about 'increase in severe hurricanes' -- they are what 'climate change' has supposedly wrought. When I look at your annual numbers (thanks for those btw) I see some very severe storms in the 1960's and in the 1940's.

The problem with extrapolation plots like yours are that one can take any stretch of time and find the slope that they want. Cut off a year or two from either end, and the slope changes. In the extreme, extrapolations give you things like this:

As the article points out, things looked so dire that 'scientists' considered covering the polar ice caps with soot to absorb more of the sun's heat. Funny that just recently, Mexico banned a group from injecting sulfur in the Earth's atmosphere in an attempt to cool the planet.

Gore was in the news recently... remember his prediction that sea levels would rise by 10 -20 feet 'soon'? NOAA reports that will take at least 1000 years https://www.foxbangor.com/national-news ... ven-false/

Gore also said that our polar ice caps would be gone each summer by 2016.

My point is to show the silliness of environmental alarmists, and to point out the harm that they do to their own goals. Right now, green energy provides 3-5% of the US energy needs. The MacroVoices podcast is doing a special energy series and they will point out the numbers better than I can-- but using the most aggressively-optimistic assumptions, wind and solar will provide, at most, a third of our energy needs in 2050, when hydrocarbons are supposedly going to be phased out completely. Greenies are pushing to shut down nuclear, which is the only real solution to our energy crisis.

If anyone truly worries about hurricanes, don't bet on a cooling planet bailing you out. If, God forbid, we ever cool the planet enough to eliminate hurricanes, we won't have a growing season anywhere on Earth and that will bring other problems. Even the Newsweek article above hysterically complained about 'shortened growing seasons in Europe' back in the 1970's when the Earth was 'cooling'.

Almost all of the increase in dollar damage by hurricanes is due to growth of cities and homes on the coasts... and a little bad luck with Katrina. Hurricanes have battered our Gulf and East coast for thousands of years, and that will never change.

Alarmism makes our kids stupid. Many buy into the idea that our planet has worse weather now than 50 yrs ago. Climate scientists have pointed out, repeatedly, that the current California storms have NOTHING to do with 'climate change' -- yet the media lap up comments by Gore about 'cloud rivers' and 'boiling oceans'.

I'm between patients so I have to run. Even if I buy into the regression lines, the difference isn't significant from a practical standpoint. And if a consistently warming climate is to blame, why does the effect wax and wane so dramatically? Take out one of the highest points on the right and you have a flat regression line.

Next we'll talk about why 6% of California kids suddenly decided they were born as the wrong sex....
Top

Re: Hurricanes and climate change

I should also point out that 1. methods of measuring the ocean and surface temps have changed dramatically over the decades, and 2. organizations that collect data in the regression plots above have their own bias.

The scientist also discussed manipulation of data within NOAA, accusing a few individuals of “fiddling” with ocean and atmospheric data under the Obama Administration. He also brought up the prominent scientific organizations’ censorship of viewpoints by refusing to publish skeptical scientific papers.
Top
Post Reply
3 posts • Page 1 of 1